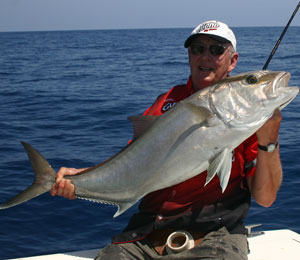 Amberjack is a name that is used to categorize several types of fish from the Carangidae family, which are a species that is prevalent in the Atlantic Ocean. These fish include Pompano and two different types of jack fish. Key West is known for being a great place to catch large Amberjacks. These fish can oftentimes reach well over 100 pounds in weight, which is why they make for the perfect target for a trophy fish outing. Amberjacks are fighters, too, and are always a fun physical challenge for any angler.

Amberjacks are known for being an active and highly predatory fish that will feed on anything from crustaceans to squid. They display offshore spawning patterns year-round.

Larger sized Amberjacks are typically quite simple to identify thanks to their signature dark colored stripes. These stripes run from their noses to their dorsal fins. On average, a large Amberjack will weigh somewhere around 40 pounds. With that being said, they are often caught in much larger sizes than that in Key West. Their ideal habitat is in places where they can easily hide, such as around shipwrecks, underwater structures and reefs. They can usually be caught in relatively shallow water.

Amberjacks that are of a small size have a bit of a different appearance, and can be identified by their silver sides and body colorings ranging from pale green to dark brown. They also often have a dark, wide line that begins at their eyes. They can weigh up to 10 pounds, and prefer to live quite a bit deeper than larger Amberjacks, with a ranging depth of 300-750 feet.

How To Catch Amberjacks With Your Guide

Key West Amberjack fishing is among the best you will find anywhere, as its clear, blue waters are littered with wrecks and other perfect habitat. Large or vertical jigs are what you will be using, along with live bait of a large enough size to attract the attention of big, hungry Amberjacks.