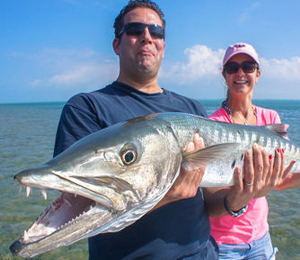 Barracuda have a well deserved reputation for ferocity. Though humans aren’t their natural prey, they have been implicated in several attacks on humans. Some people believe they're more fearsome than sharks. But that's because they’re curious and intelligent fish and are attracted to shiny objects which resemble their usual prey. They’re members of the Sphyraenidae family, which has about 20 species.

Barracudas are long, torpedo shaped fish with widely separated pairs of anal and dorsal fins and good eyesight. They often have protuberant lower jaws. One of the largest is the Great Barracuda, which can grow to six feet six inches long and weigh over 100 pounds. It’s a great game fish because it puts up a fight when it’s hooked and will often leap out of the water. However, it gets tired easily. Smaller members of the species are found close to the beach and can be taken with light tackle from a boat or the shore. The larger individuals are found in deeper water and need to be trolled with medium heavy tackle. The Great Barracuda is found in tropical and temperate water in the Atlantic, the Mediterranean and the Black Sea.

The Pacific Barracuda is found in the Gulf of Alaska and south to Baja California. It has a black stripe along the lateral line and can weigh up to 18 pounds. Another barracuda is called the Guaguanche, which has a yellow stripe down the side. It’s found in the Atlantic and can grow to two feet long. Other barracudas are called sennets. The northern and southern sennet are almost identical fish, though the southern sennet has a slightly larger eye. They both grow to about 18 inches long. The northern sennet can be found from New England south to the Gulf of Mexico while the southern sennet ranges from Florida to Uruguay.

Barracudas eat smaller fish that travel in schools, especially ones that are bright and silver colored. Inside the barracuda's jaws are large and sharp canine teeth that are used to grip the prey and smaller, razor sharp teeth that tear it up.

For bait, the barracuda fisherman should use flashy spinners, fish strips and whole, small fish like sardines and anchovies in Key West.