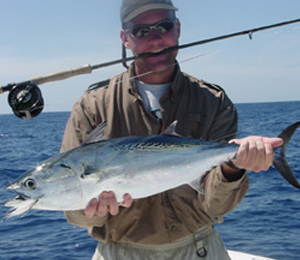 The bonita, also called the bonito, is a beautiful and sleek fish in the genus Sarda. They’re typically “fish-shaped” with boomerang shaped tails and sharp edged spines along the stem of the tail. They also have stripes on their flanks.

The Atlantic bonito is the species that’s found in the Florida Keys. The stripes on its side are somewhat slanted and it has from 20 to 23 spines in its first dorsal fin. When it feeds, a yellow stripe develops along both sides of its back and vertical bars appear down its sides. These go away when the fish is no longer feeding. The Atlantic bonito travels in schools at both the surface of the water and at depths of 165 feet. It usually weighs around three pounds but can weigh as much as 19 pounds. The meat is fatty and firm and high in omega-3 fatty acids. A close relative, the striped bonito, is a bit smaller and can range as far north as Massachusetts.

How They Feed and What’s Unique about Bonita

The bonita is a fast moving predator that eats squid, alewives, sand lance and mackerel, which they grab just below the surface of the ocean. Though they’re predators,s bonitas don’t have teeth on the roofs of their mouth. The bonita is sometimes itself used as bait.

How We Get Bonita

Bait for bonita include spoons, plugs, plastic squid and whole or cut up squid and fish.