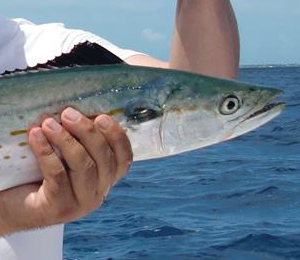 Cero are a relatively large member of the mackerel family; the largest Cero on record in Florida weighed 17 pounds and 2 ounces. They will take any sort of bait and when they bite they do not let go. Getting the fish on the hook and into the boat may prove to be two entirely different feats, as the Cero are known for being very aggressive. In terms of aggressiveness, however, Cero are typically overshadowed by their cousins, the Atlantic Spanish mackerel and the King mackerel. Cero typically swim in large schools.

The Cero may also be referred to as the "painted mackerel". Their coloring is distinct from their Spanish counterparts because while the Atlantic Spanish mackerel only has spots, the Creo has spots and a longitudinal stripe. Also, the lateral line of the dorsal fin has a gradual descent from the shoulder, unlike the king mackerel which has a sharp break. Mackerel will eat whatever swims their way and the more of it there is, the better; they are voracious eaters. However, their diet consists mainly of small fish, as well as some squid and shrimp.

How We Get Cero Mackerel

One of the easiest ways to spot mackerel is to look for a large amount of bird activity. Cero are rare in waters north of Palm Beach but they have a large presence in the main Key West fishing area. They generally prefer to spend their time in patch reefs, which can be found in the Gulf of Mexico and the Atlantic Ocean. They can also be found in the basins and channels of the lower Keys. When hooking a mackerel, use a top water plug or flashy spoon. Also, get their attention by using erratic, jerky movements.