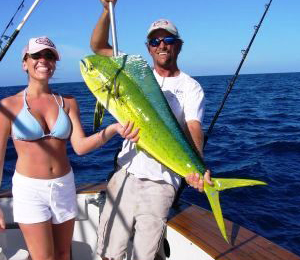 The Basics of Dolphin Fish

The Dolphin fish should not be confused with the Dolphin that is a mammal. It is known by many names around the world but it is a fish. In Hawaii, it is called the Mahi-Mahi. It is a culinary treat and fishermen the world over appreciate its beauty as well as its size.

The Dolphin mates for life. They are amazingly strong swimmers that frequently breach the water in stunning aerial displays. Also called the Dorado, this ray-finned fish can be found in tropical, off-shore waters and it lives near the surface. Dolphin fish are easily located which makes them a favorite for fishing trips in the Keys. Most dolphins found near Key West range from 15 to 20 pounds, although a record-breaking 81 pound fish was caught in the area.

Bull Dorados are much larger than the females. The head of the cow is also more round in shape that the male's head is. They are prolific breeders and spawn in the warm waters surrounding the Keys throughout the entire year. The young feed in areas that are rich in sea weed. They reach sexual maturity at four to five months and females spawn two or three times each year. Egg clutch size is considerable with numbers between 80,000 and one million eggs possible during each cycle.

How We Catch Dolphin Fish

Fishing guides search for two things when hunting for the Dolphin fish. A floating weed line of Sargasso provides a viable ecosystem for many of the fish that the Dorado thrives upon. Once this weed line is located, the guides look for activity by frigate birds. When Dolphin fish are in the vicinity, the flight patterns and dives of these birds signal their arrival.

The Dolphin fish eagerly go for the flies that fly fishermen cast. Most prefer to use light tackle spinning gear in order to enjoy the fight. Gear in the range of 30 to 50 pounds is simply to heavy for play. Most guides will bring live bait into the area to keep the fish close to the boat. During the feeding frenzy, most anglers will get a chance to snag a nice sized fish.