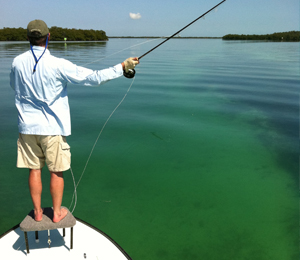 After bonefish fishing on a Key West flats fishing charter you will understand why it is known as the Grey Ghost of the flats. These fish are extremely wary and spooky. They are also known as Albula Vulpes, and are found in tropical waters and warm waters where there are flats and shallows.

They are temperature sensitive fish and prefer the 78-82 degree temperature range. The 70 degree mark is their threshold. The high 80’s will send the fish off the flats. They are primarily bottom feeders found while flats fishing in Key West. They are on the flats in search of food only. Bonefish feed on sand worms, crabs, shrimp, mollusks and small fish. They have crushers and can flatten and devour any mollusk or crab. Bones are constantly being chased by sharks therefore keeping them constantly aware. They usually are in schools of similar size fish. The larger fish will be singles, pairs or a 3 or 4 fish pod. The average size Keys bone is a 5-7 pound fish. The bigger fish can reach upwards to 13 pounds and are considered a trophy.

Seasons for Bonefishing in Key West

The best season for bonefish fishing in Key West is from April through the first cold fronts which push through in late October or November. The fishing can be phenomenal during the winter months during a warm up between fronts, as long as the water temperatures allows on the darker bottom flats.

Where to Catch Bonefish in Key West

The Bonefish is found from Key Biscayne to the Marquesas Keys. The bigger fish are found in the Islamorada area but the lower keys and Key West flats fishing also offer excellent opportunities.

How / Techniques to Catch Bonefish

Tides are very influential on bonefish. Bones generally feed into the tide and their sense of smell is essential for them to find food. The fish are first hunted while the angler is ready when an opportunity presents itself. The Key West fishing charters guide poles the skiff quietly onto the flats and searches for the fish. The fish can be seen cruising, mudding, or tailing. Spotting the fish is an art in itself so a seasoned guide is essential to be successful. The fish cruising are usually swimming over the flats through the water. Tailing is when the fish’s tail is above the water making it easy to locate. Mudding fish are actively feeding and puffing marl as the filter out prey. Fish can often be pushing water as they move in shallow waters making a wake. Fly fishing for Bonefish is the perfect scenario for the angler coming from trout fishing. Presentation is the key to get hooked up to the lightning bolt of the flats.

A light spinning rod is most often used with 8-10 pound line. There is a short piece of fluorocarbon leader which is relatively invisible in the water, a 1/0 hook and a live shrimp. A smooth drag is essential as these fish can burn a 100 yards in a few seconds once hooked. This makes the bonefish the prized shallow water fish. The fly rod would be a 7-8 wt. setup, and a 12 foot leader with a 12# fluorocarbon shock tippet. The fly of choice is based on water depth, and bottom color.