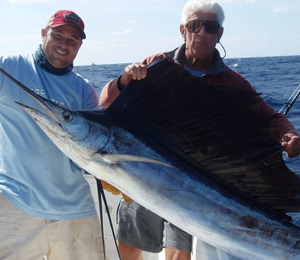 Being able to catch Sailfish in Key West is the dream every angler has when considering what Key West Fishing Charters to book. The Sailfish is one of the most sought after sport fish in the world. It is considered one of the fastest fish in the ocean. Located in both the Atlantic and Pacific Oceans, it can be caught off of the coast of Key West Florida the entire year. As one of the most acrobatic fish in the sea, a Sailfish can jump up to 20 times throughout a fight, and on Key West light tackle fishing, this is quite an accomplishment to land this fish.

The Season for Sailfish fishing in Key West starts around the beginning of October extending through the spring months. However the peak of the Sailfish migration is in the month of April. April and May is when the water temperature is optimal for this Pelagic Species.

Where to Catch Sailfish in Key West

The Sailfish range from 25 ft of water out to 2000 ft, depending on the location of the bait fish. When the Ballyhoo are located on the shallow reefs, Sailfish are known to chase this delectable treat no matter what the depth. Sailfish can also be seen on weed lines and debris found offshore, depths usually ranging between 150 to 1000 feet of water.

How to Catch Sailfish in Key West

Fishing for Sailfish in Key West, Florida can be caught using a variety of techniques. The favorite and most effective way of Key West deep sea fishing charters is using live bait. Often prior to going out the Captains will pick up some wild, fresh caught live bait for the Key West fishing trip. On the drift or slow trolling are the choice of most, this depends on the sea conditions of the day. Under windy conditions the Kite Fishing technique is the most effective way to raise a bite. This method allows the bait to swim just under the surface creating a lot of action, increasing the percentage of raising a feeding fish.

Some of the best Sailfish fishing in Key West is done with the Shimano Trinidad 30. This rod is a great light tackle conventional reel used with 15 to 30lb test line is a great reel to fly from the kite. For the drift technique any Shimano spinning reel with a bait runner feature is used best with a live threadfin herring or a small blue runner ranging from 1 to 2 lbs.