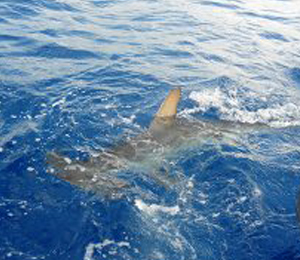 The Basics of Hammerhead Sharks

Hammerheads are found in warmer waters internationally, mostly around coastlines and continentals shelves, making the Keys an ideal ground for this shark. Aside from the Keys, the hammerheads can also be found in areas like Hawaii, Colombia, and Costa Rica. The hammerhead can also be found in larger schools often around eastern Africa. The hammerhead shape actually gives this shark the ability to laterally project, letting them swim with excellent ease and precision. Some researchers say the shape of the head was even evolved over time to help the shark see better in the dark waters.

The hammerhead travels in schools typically during the day, making it unique from other types of sharks, though it will hunt by itself in the evenings. They are light gray with a greenish tint, with white bellies that allow them to sit on the ocean floor and blend in to entice prey in order to feed. The hammerhead actually has a small mouth even though it has such a wide head, and as such does plenty of bottom feeding, making its ability to blend into the ocean floor all the more valuable.

How We to Catch Hammerhead Sharks

When you go out with a guide, there are specific things both you and the guide will be looking for to ensure good fishing. Fishing of several types of hammerheads is regulated and licensed, due to over fishing and some species becoming endangered. Once an accurate type of hammerhead is located, either visually or by locating a school nearby, the shark can be caught traditionally from a strong hook and line or through a netting process if the shark is smaller. Many fishermen choose to just keep the fin of the hammerhead, which is considered a great delicacy by many in the fishing world.

Setting out for hammerhead fishing can be incredibly exciting, particularly if this is your first venture for this type of large fish. Setting out for some Key West fishing, consider hammerheads as your next big game, but make sure you understand some basics of this game as well. The hammerhead has enough in common with other traditional shark breeds to keep it exciting, but enough unique qualities to deliver a truly special fishing experience. It will make for an outing you are sure to remember, particularly when you rely on trusted professional who know how to deliver the goods.