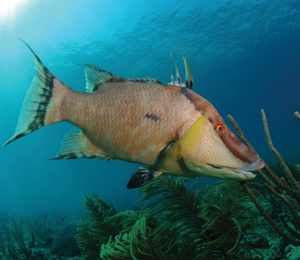 The hogfish (Lachnolaimus maximus), also known as the hog-snapper, belongs to the monotypic Lachnolaimus genus, and the family Labridae, which consists of the colorful and variable wrasses. The hogfish's color is likewise variable; each individual's coloration may change according to age, sex, location, and habitat – e.g. in sandy locales, the hogfish is often a light pink, while in grassier regions, it is often a deep pink, sometimes with a gray or brown hue. However, unlike the majority of wrasses, the hogfish's body is compressed laterally, into a roundish shape (most wrasses are characterized by an elongate, cigar-shaped form). Its dorsal fin features long streamers. Its broad, shallowly forked caudal fin exhibits a pair of much more diminutive streamers.

The hogfish gets its name from its elongate, porcine snout and protruding mouth and front teeth, which are used, in accordance with its bottom feeding tendencies, to forage diurnally along the seafloor (plowing through the sand with their large snouts) in search of gastropods (abalone, conches, whelks etc), bivalves (many marine mollusks; clams, oysters, mussels, and the like) and various marine arthropods (crabs, barnacles, etc) and even some echinoderms (sea urchins, sea stars). Their preferred food includes small shrimp, crabs, and worms.

Interestingly, the hogfish is a protogynous, sequential hermaphrodite; it begins its life as a female, and then changes its sex to male at various stages in its lifecycle, usually at or around three years of age. Hogfish additionally form harems, wherein a single male is dominate over a large group of females.

Hogfish may live up to eleven years of age. While occasionally captured as juveniles for the aquarium trade, the economic importance of hogfish generally lies in their unique flavor, and the relative rarity of them as catches in sport fishing. In Florida, the hogfish is particularly important to commercial and recreational fisheries. There is some interest in the aquaculture community in raising hogfish in captivity, primarily to maintain breeding stock, and to ensure a consistent supply for fisheries.

Key West Fishing -- How to Locate and Catch the Hogfish

Hogfish are found in the western Atlantic, ranging from North Carolina to the Gulf of Mexico. This reef species, ideal for Key West fishing, is most often found close to the ocean floor, near coral, rocks, shipwrecks, and other cover debris. The largest hogfish are typically found at the deepest edge of the main Atlantic reef, from fifty to one hundred feet.

Spawning occurs off the Florida coast during February and March, and the larval stage of Hogfish lasts several weeks before they mature into juveniles.

Florida regulations limit bag numbers to five per harvester, per day, and the minimum size is listed as twelve inch fork (from the fork of the caudal fin— excluding streamers –to the snout's tip). Legal gear is spears, gigs, hook and line, seine, and cast net, and reef fish gear requirements apply. Greatest success is found with light tackle, and chum with crustacean parts, which must be anchored or weighted near the seafloor. Shrimp make ideal bait.