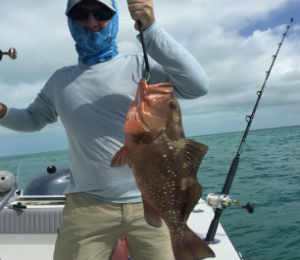 The new year has brought many new fishing experiences to many visitors to Key West, and this week’s Catch of the Week celebrates an amazing catch by an area captain. Although red grouper are common to Key West and can be caught any time of the year, it’s rare that we see such a fine specimen caught at this size!

Martin hopped on one of our Key West specialty charters while visiting from Marco Island, and it’s lucky he did. While visiting, Martin caught a whopping 25-pound red grouper! Although it isn’t record-breaking, reeling in a fighting red grouper can be tough, yet Martin was able to reel this one in with no trouble -- and no line breaking. Red grouper can range dramatically in size, yet many average just between 3 pounds and 5 pounds. However, aboard Key West specialty charters, experienced captains will guide you to the best spots to catch the giant red grouper that can weigh more than 40 pounds! If you’re lucky, maybe you can take home a 20+ pounder like Martin.

Red grouper aren’t difficult to catch for their size, but due to their stamina during the fight. These guys -- no matter their size -- are never caught without a fight. So whether you snag a 5-pounded in shallow waters or are grappling with one that weighs more than 30 pounds in the deep sea, you’re in for challenge.

Where to Catch Red Grouper in Key West

We love red grouper because it can be caught year round in Key West, making any fishing excursion a hunt for a giant red. It’s a fishing staple around these parts because red grouper stick to waters that range from 66 degrees and 78 degrees, but that doesn’t mean you don’t have to hunt for them. Red grouper are a rusty, brown-red color with an orange-scarlet mouth. They have white-spotted patchy areas on their sides arranged in a random, non-pattern look.

The best places in Key West to catch red grouper are during wreck reef fishing, deep sea fishing, and Dry Tortugas fishing. These areas provide them with plenty of cover but are also great spots for them to hunt smaller fish, crustaceans and squid. They also enjoy eating juvenile lobster, shrimp and crabs. As bottom-dwellers, red grouper prefer rocky, coral or hard bottoms, however, because they often feed on the small fish found at the coral reefs, it is not uncommon to snag a red grouper in shallower water.

Red grouper is not unique to Key West as they can be found throughout the Gulf of Mexico, the Caribbean Sea, all along the southeastern coast of the United States and are found as far south as Brazil.