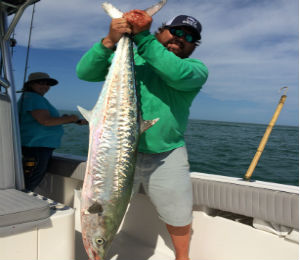 Fishing in Key West has been better than ever this week. The many Key West fishing tours that we offer have resulted in a wide range of spectacular catches of many different species of fish. While there were a large variety of boast-worthy catches throughout the week, there ware none more amazing than the catch of a King Fish. A King Fish can be exceedingly difficult to reel in, as it can put up more of a fight than most species. However, it was the weight of the fish that places it as the Key West Catch of the Week, weighing in at a massive 100 lbs! It's clear that the angler that reeled this fish in was more than prepared for the task at hand.

King Fish are one of the most highly sought after game fishes in Key West. They can be found all throughout the Atlantic Ocean and Gulf of Mexico, though they frequent the waters of Key West. This species of fish isn't the largest one in Key West, though it can exceed 100 pounds. It tends to weigh closer to 30-50 pounds, though can be as small as five pounds. Though they aren't the easiest fish to identify when below water, their largely silver bodies can make them easy to spot on days with good weather, which this past week had plenty of. Their bodies are lined with tiny and loose scales, which can be seen even better once they have been reeled in. They are relatively long and slender fish. They can swim in waters ranging anywhere from 68 degrees Fahrenheit to 85 degrees Fahrenheit. As the temperatures were in the mid 70's throughout the week, this created the perfect conditions for catching this fish, though the large weight must have made it very difficult to reel in once hooked. When traveling on one of our Key West fishing tours, you will find that the King Fish tends to swim at a depth of around 50 to 150 ft.

The migration patterns for the King Fish might also provide a hint as to why one was caught in Key West. It's important to note that a group of King Fish that have started to migrate from the Gulf of Mexico during the summer would arrive in and spend their time around the waters of Key West and the rest of Florida during the months of November to March. King Fish are difficult to reel in once hooked due to their immense speed and aggressive attempts to break away from the line after hooked. This behavior also displays itself through their feeding habits, as the King Fish are highly disruptive when attempting to hunt their prey, which includes everything from jacks and squid to northern Mackerel and anchovies. No matter how much how much experience you have, drop by Key West today and see if you have what it takes to reel in a catch that earns our next Key West Catch of the Week.