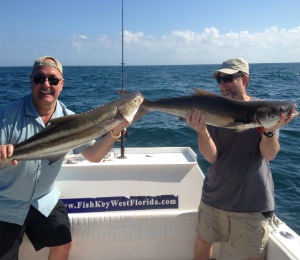 While the winter means an embargo on traditional fishing in much of the United States, here in Key West you can find some of the best fishing available. Deep sea fishing success is abundant in January and February, and even the coral reefs and flats offer plenty of bites. Along with the fantastic cobia which has earned our Catch of the Week, you can expect to find snappers, grouper and mackerels staying close to the coral reefs in the month of February. And if you’re heading to the flats to try your luck at cobia, there’ll be lots of permit, barracuda, jack crevalles, redfish and even bonefish to catch. While the flats are not a typical place to find cobia on their own, they often stick close to sharks and stingrays that head to this area.

The cooler winter months are the best time of the year for catching cobia because they migrate to the warm tropical waters of Key West and other Caribbean locations. In late January and all of the month of February, you can find these highly valued fish around the coral reefs and in the flats of Key West. And because cobia are pelagic, meaning they live near the surface of the water, they can be easily spotted in the beautiful clear water found here. Look for their long, slender bodies with a dark strip of brown running the length of their bodies. These fish are sometimes mistaken for sharks because as they swim, they keep their pectoral fins horizontal. But don’t be fooled, as these tasty fish respond to noisy lures and plastic eels. Cobia prefer to stay close to structures such as the coral reef and shipwrecks where they can hunt for squid, crabs and shrimp, but they have been known to follow around larger animals such as sharks, stingrays and turtles to scavenge for food, which makes it easy to spot them on the move. The size of cobia found in Key West can vary dramatically as the fish can grow up to 6 feet and weigh 100 pounds.

One reason that cobia is our catch of the week -- and maybe our favorite species to catch in February -- is that the population is not overfished in the Gulf of Mexico or the Atlantic. This means there’s plenty of cobia for everyone as long as you make the trip for Key West fishing before the late spring when cobias migrate back to their original waters.

In the shallow waters, you might expect Key West fishing to be lacking in excitement in the winter. But the warm days and the south winds keep the water warm enough to provide a perfect migratory destination. We think this is a perfect time to fish in Key West because the crowds that flock to the area in the spring have yet to come, and the fall fishermen have long gone. And there are still plenty of big fish that stick to Key West waters year round, so you always have something to chase.

The weather for February 2015 is expected to stay between high 70s and low 60s, making every day a wonderful opportunity to be out on the water. Days with a warm breeze from the south will be optimal for catching cobia on the flats, but you can always find them hiding in the shipwrecks near the reefs. Be prepared for a fight, though, as cobia are strong and fast, and most of the cobia caught in Key West weigh around 50 pounds.