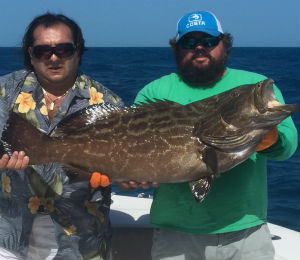 Though the year is quickly coming to an end and the cold air has swept over much of the nation, Key West is still proving to be a prime spot for fishing in the month of November. We have seen some really great weather and fishing conditions all throughout the month, which has facilitated a huge number of amazing catches by anglers of all different skill levels, both local and ones that traveled here on vacation. Sharks, in particular, are being caught at a frequent rate in November by those participating in some Key West Florida fishing. While Sharks are some of the most plentiful catches, we've seen abundant hauls of a wide variety of other species of fish, particularly the Black Grouper, which spends much of its time in warmer waters, especially in those of Key West.

The Black Grouper is one of the most common species of fish that can be found here in the waters of Key West and thrives in warmer conditions. Thankfully, the consistent warm weather during much of the month of November has worked well to keep Black Grouper biting lines with great frequency. The Black Grouper is one of the many different species of Grouper throughout the world. It's also commonly referred to as a Black Rockfish. Though this fish is at its most prevalent in the months from May to August, it can be found in Key West and other nearby areas as long as the water is warm. In many parts of Florida and Key West, Black Grouper is highly sought after as a game fish and a food fish, as the meat of the Grouper is exceedingly tasty. The Black Grouper feeds primarily on crustaceans, Squid and Shrimp and can grow up to a weight of more than 150 pounds.

As mentioned previously, the weather is also one of the key reasons as to why fishing has been fantastic on most of our charters throughout the month. While we've seen a good amount of rain, we've also had a ton of sunshine as well, with temperatures hovering around the high 70's/low 80's for most of the month, which is the perfect temperature range for creating warm enough waters to still catch a wide variety of different species of fish. The small rainstorms that we've seen during the month have also made for some amazing fishing conditions, as many species of fish tend to do their feeding just after the rain has ended. While many areas of the country are beginning to experience freezing temperatures, Key West is still as warm as ever, which should make for some interesting catches well into the month of December. The best aspect of the fishing this month is that it proves there is never a bad time for fishing in Key West, so if you want to see if you have the skills to reel in a noteworthy haul, don't hesitate to drop by and participate in some Key West Florida fishing today!