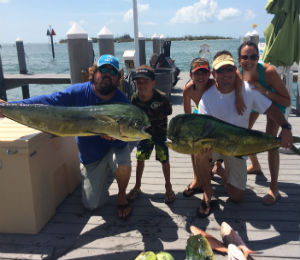 August has been an exemplary month for fishing here in Key West. Anglers sailing on our Key West fishing charter have found that the fish have been biting at a steady pace throughout the month. As can be seen in the picture, Mahi Mahi were particularly abundant throughout the area during august, with large amounts of varying sizes having been caught on a regular basis. Catching 8 of any species of fish is a noteworthy feat, though is all the more amazing when Mahi Mahi are the subject of such a large haul. However, Mahi Mahi were not the only type of fish hauled in during our many charters. Both our deep sea fishing and light tackle fishing charters have been more than successful at reporting in satisfying catches during the entirety of August.

One of the primary reasons that we have been seeing such great fishing as of late has to do with the weather patterns over the past month, as Key West has been lucky to experience prime fishing conditions all throughout the month of August. The warm weather has been great for the Mahi Mahi, as they enjoy water temperatures of 80-85 degrees and are easier to locate and haul in due to this. We've also received a great combination of warm and sunny days with windy and cloudy days, both of which allow for favorable fishing conditions for different types of fish. The Mahi Mahi are particularly susceptible to being caught on cloudless and sunny days, which August provided plenty of.

Although the anglers that have come through our charters during August have been quite skilled, many of the fish seem to be biting more readily as well. As light rain facilitates the need for feeding within many species of fish, this shouldn't come as too big of a surprise, as August has provided a good amount of intermittent rainfall. Mahi Mahi aren't the only species of fish that have been biting at the lures either, as we have seen a variety of catches ranging all the way from Tarpon and Shark to Swordfish and Marlin. Our captains have done an excellent job at guiding even the most inexperienced of anglers to advantageous waters, allowing for a myriad of surprising and bountiful catches.

Heading into September, it's clear that the greatest fishing days of the summer are upon us. All that's left is to hope that September continues this trend and sends the summer off with a bang, so visitors from all around the world have the ability to experience the very best that Key West fishing has to offer. If you're an experienced angler that has been out on the water hundreds of times or are merely on a vacation and looking to dabble in some of the finer attractions in Key West, simply come on by, hop on our Key West fishing charter and find out for yourself why Key West is known as one of the grandest destinations for fishing in the world.