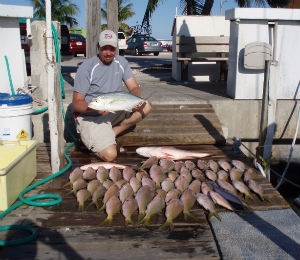 The Key West fishing report for the first week of June continues to highlight tarpon in the flats, lots of snapper off the reefs, and dolphin off shore. The first day of June marks the start of hurricane season and it is getting hot out there. The winds have been heavier than normal for May, which has slowed down some of the action.

The forecast for the next week is for more 10 to 15 mile per hour winds, which is a nice break from the last few weeks, but might keep the water stirred up. Once the winds settle, the water will clear and the fishing will improve. Almost everyday calls for mostly cloudy skies with a chance of showers. Those who can stay dry will have some decent days out on the water.

The moon reaches first quarter in Friday which will not help the fishing at night this week. However, the snapper are abundant and available after spawning near the reef under last month's full moon. Getting a break in the weather should create an opportunity to get the limit for every angler on the boat. The mutton snapper is especially plentiful and easy to catch.

These are nice fish that often can tip the scales at twenty pounds. Jigging off the reef in 50 to 75 feet of water is a good start. If this is not productive, or another type of fishing is desired, there are options. One of the nice features of the Keys is that there are always other opportunities to catch fish.

The Flats of Key West

Keep an eye on the Key West flats fishing report, and the winds, as any calm and clear days will make for red hot tarpon action on the flats. Those who have never hooked into one of these fish will want to keep their option open. These fast moving fish like the warm shallow water of the flats and it is easy to see them in the crystal clear water.

They will take a fly and will race off, setting the angler up for quite a fight. As the temperatures rise they will continue their migration to the north and the lack of much moon light should cause them to feed more during the day.

Off Shore of Key West

Fishing off shore is a good way to take advantage of another migrating fish as the Key West fishing report shows big dolphin have been plentiful even on windy days. The rainy season is coming quickly and water temperatures are ahead of schedule, so deep water trips should be kept short to avoid any weather that pops up.

The opportunity for good sailfish is too good to pass up and sometimes can be found without going too far out. In addition to the marlin, swordfish are also around in good numbers. The summer will just keep getting hotter and hopefully, so will the fishing.