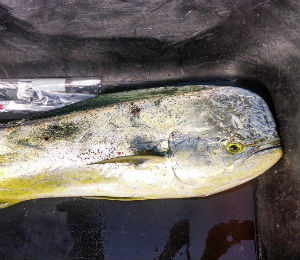 Despite the fact that the Fall season was the first full month of October, the fishing here on our many charters in Key West has been more eventful than ever, with a number of jaw-dropping catches being caught and photographed every day. In fact, the fish seem to be biting at an even higher rate than normal, which is seemingly bolstered by the fantastic weather conditions that we've been having as of late. Mahi Mahi is one of our favorite fish in Key West and it has been caught a myriad of times already this October on our charter boats. In fact, the Mahi Mahi is the exact species of fish shown in the respective picture. Though the Fall season is nearly halfway gone, the influx of biting fishes has seemingly just gotten started.

In general, October tends to be one of the better months of fishing during the year. However, this year took it to a whole other level that has really only been seen in the month of July, particularly in regards to Key West light tackle fishing. A myriad of species have been caught in abundance on all of our charters. Our Flats Fishing charters reported back with a myriad of catches during October. Tarpon and Permit, in particular, were among the most commonly caught species. As for Key West light tackle fishing, including fishing among wreck reefs, there were some brilliant catches of Sharks, Barracudas, Snappers and Spanish Mackerels. The Yellowtail Snapper was a particular standout throughout the month of October.

Our variety of deep sea fishing charters were also not without their highlights, as Marlin and Dolphin have been seen and caught in abundance throughout the area. However, Mahi Mahi was definitely caught in these waters much more than was expected for October, signalling that November is still looking to keep up these trends. Many visiting anglers have found huge success this month by fishing around reefs and similar areas, which invariably led to an influx in bites from a variety of different fish species that spend their time among reefs, such as the Yellowtail Snapper. The weather was also generally nice throughout the month, with the highs hovering around the low to mid 80's, making it very comfortable for visiting anglers. There was some rain during the month, but more than enough pleasant weather conditions to create some great fishing opportunities for everyone.

As mentioned previously, we offer Key West light tackle fishing, deep sea fishing and flats fishing, which will help to serve you well no matter what you're looking for. Our charter captains are all highly experienced and will show you the best areas for fishing, as well as giving you some useful advice that may help you actually catch a couple of fish. If you are in the mood for some eventful fishing, there's no greater time than now to visit Key West and take one of our charters out, as October points to yet another amazing fishing month for November.