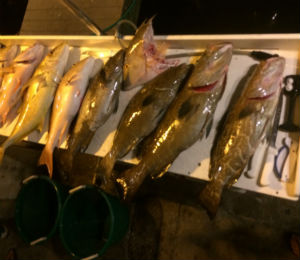 As October steadily approaches, we take a look back at the all the fishing that's taken place over the month of September in this Key West fishing report. All in all, this was another spectacular month of fishing, much more so than expected. No matter what type of species of fish you can think of, odds are it was caught at some point in September. Mahi Mahi were once again in abundance during the month of September, as they have been all summer. While this species of fish can always be found within the warmer waters of Key West, it's clear that more schools of Mahi Mahi have been making their home at Key West than usual, likely due to the pristine fishing conditions on display as of late.

Mahi Mahi haven't been the only prevalent species of fish during September. In fact, a large amount of Mangrove Snappers and Groupers were caught throughout the month. In the picture shown here, the 4 Grouper fish range from an impressive 20-40 pounds, while the 4 Mangrove Snappers weighed in at 15-20 pounds, which is actually quite heavy for Snappers. The many impressive hauls during the month of September were likely bolstered due to the stellar fishing conditions that we've had as of late. While there have been a fair amount of sunny days filled with clear skies, the overall light rain and temperatures that have hovered at mid to high 80's have helped to create exceedingly favorable fishing opportunities.

Weather conditions play a huge part in how readily the fish are biting, which is one of the primary reasons as to why anglers have been reporting such a huge influx of catches during September. Mahi Mahi are particular in that they prefer warm and sunny weather. Despite the fact that there were a few more rainy days than normal, Mahi Mahi were still being reeled in with quite some frequency during September, which is hopefully a sign of things to come as we enter the breezy days of October.

Although the summer is now at an end, prime fishing conditions last throughout the year in the balmy weather of Key West. Most species of fish whose habitat lies in these waters do not migrate until well into the winter months, as the waters stay exceedingly warm for longer than you might expect. October looks to extend this amazing streak of fishing we've had over the past few months here in Key West, and you too can enjoy all that our fishing charters have to offer by simply reserving your spot on one of our next outings. Who knows, maybe your next catch will contribute to October's Key West fishing report. Whether you're interested in discovering the many unique species of fish that can be found when deep sea fishing or enjoy the comfort and peacefulness that often comes with light tackle fishing, we offer a wide variety of charters that will ensure that your next fishing trip is an unforgettable one.