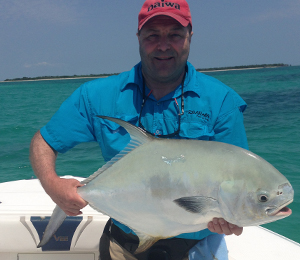 The permit is a close relative of the pompano family and shares with the others the deep body, blunt head and a forked tail. However, the permit can grow much larger than the pompano. Like the pompanos, the permit is found in warm waters in the Atlantic, including the Florida Keys. Like its pompano relatives, it prefers very shallow water and is an easy catch even as it puts up a bit of a fight.

The permit eats mollusks and shellfish, including shrimp, crab, barnacles and sea urchins. Often, they use their mouths to dig these animals up from the sea bottom or benthos. Though they're timid if they’re approached alone, a school of permits can become aggressive and attack.

Since it lives in shallow water, the permit might be easy to hook but a challenge to reel in. This is why they're prized as game fish. They can be caught through surfcasting or spinning either from the shore or from a boat. If surfcasting, a fisherman might want to use a 12 foot rod with sinkers. If spinning is the technique, an eight foot spinning rod should suffice. The rod should be equipped with a 6 to 12 pound mono line and a short 20 pound mono leader. A 2 to 2/0 sized hook should also be good to catch a permit.

Bait for the permit include sand fleas, small bucktails, clams and crabs and jigs.