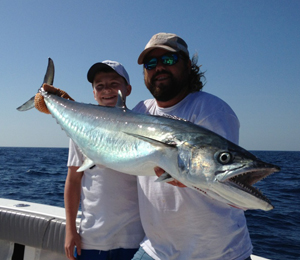 A Little about Them:

In the Key West, the king mackerel is considered a medium-sized fish that normally ranges from five to 30 pounds, although the record is currently set as 90 pounds. Similar in coloring to the Atlantic Spanish mackerel and Cero mackerel, the fish is covered with tiny scales in dark olive on the back, fading to silver with a shiny iridescence on both sides. When fish are less than 10 pounds, they may have yellowish or brown spots dotting the flanks too. King mackerel are armed with cutting-edge, large, and flattened teeth that are closely spaced from side to side. Interestingly, the spiny dorsal fin is completely colorless and is usually folded back into a body groove like the pelvic fins.

As a subtropical migratory species, king mackerels are endemic to the Atlantic Coast of North and South America. It is commonly found along the coastlines from North Carolina, all the way south to Rio de Janeiro in Brazil and sometimes north to the Gulf of Maine. However, it has a strong preference for warm water temperatures between 68 and 85 degrees Fahrenheit, which limits its habitat. The species is commonly found at depths from 40 to 150 feet, but larger king mackerels are occasionally spotted at depths up to 600 feet at the edge of the Gulf Stream.

While all king mackerel species are ravenous and opportunistic carnivores, their feeding habits vary greatly depending on their size. Some of the common prey for king mackerel includes squid, menhaden, cutlassfish, grunts, weakfish, anchovies, minnows, threadfin, jacks, blue runners, and other fish similar to sardines. Although they prefer to feed on schooling fish, it is not uncommon for them to eat crustaceans and mollusks as well.

The Atlantic group of king mackerel off the coast of North Carolina migrates towards southeast Florida and the Keys to spawn from May through August. During spawning, the egg and sperm are shed into the ocean waters and are united purely by chance. Depending on the size of the female king mackerel, she may shed between 50,000 and millions of eggs throughout the season. After just 24 hours, the fertilized eggs hatch and the new larva is around 0.1 inches long. By seven years of age, females are around 21 lbs. and males are 11 lbs. Since males are rarely found to be over 15 pounds, the larger king mackerel that break records are most likely female.

What You and Your Guide Are Looking For:

When spawning in the Keys and the Gulf, king mackerel are generally found in large schools. In order to easily locate these schools, it is best to be on the lookout for massive flocks of birds to be the telltale sign of a school of king mackerel beneath the surface. The fish are mostly taken in by trolling, live or dead baitfish, spoons, or other artificial lures. One of the most effective ways to target king mackerel is through jigging, as well as sending live ballyhoo.