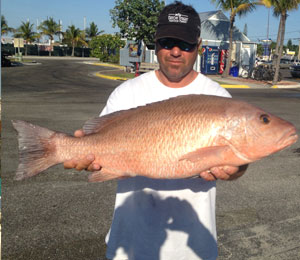 A trip to Key West promises beautiful beaches, exotic wildlife, and unparalleled environment. So, if you are looking for an ultimate fishing experience, look no farther than Key West. While the area hosts a wide variety of fish and other maritime catches, one of the most sought after species found in the waters of Key West is the Mangrove Snapper. With its unique characteristics and speed in the water, fishing the Mangrove Snapper requires a fine art.

Known for its aggressive feeding habits, the Mangrove Snapper is a strong, fast fish that resides in both the shallows as well as the deep waters of the Florida Keys. Bearing a grayish red to bright red or even copper color, the Mangrove is also known as the Gray Snapper and the Mango Snapper. When observed from above, the fish appears to have a dark stripe running through its eye, another distinguishable characteristic of the Mangrove. The typical size varies from 2 to 6 pounds; however, the largest caught weighed in at 29.5 pounds and was wrangled on the coast of Louisiana.

How They Feed & What’s Unique

A fairly common species, the Mangrove Snapper is often found in the warmer regions. Ranging in locale, this fish can be found in a variety of locations including canals, grass flats, and even open water. Partial to some sort of cover, Mangrove found in open water areas are typically located near the bottom of reef structures. A frequently sought after and highly prized fisherman’s catch, the Mangrove Snapper is deemed especially valuable for its light flaky meats.

How To Catch Them

Being that the Mangrove Snapper is so highly valued, knowing how to fish for this species is crucial. While the Mangrove will respond to a number of types of bait, the most effective are squid, shrimp, minnows, and sometimes artificial lures and baits. A particularly adept fish, it is uncommonly wary of fishermen and unknown objects. As the Mangrove’s suspicion only increases with size, attracting this fish with a tantalizing lure is vital to make a big catch. Not a large fish, comparatively, the Mangrove is most often caught with light to medium tackle. The usual size of a catch made in shallow, in-shore waters is anywhere from 8 to 14 inches, while catches made in deeper waters have measured as large as 20 inches long.

Another method that can be used to catch these fish is spearfishing; however, with their wariness, this technique is often less fruitful than a traditional baited line and rod. To attract Mangrove, chum can be used to encourage groups of the species to feed together in a desirable location.

Whether you are simply looking for an exciting fishing adventure or you have your eye on a particular species of fish, like the Mangrove Snapper, Key West fishing is sure to offer you the best opportunity. When it comes to the Mangrove Snapper, you won’t find it more readily available than in Key West.