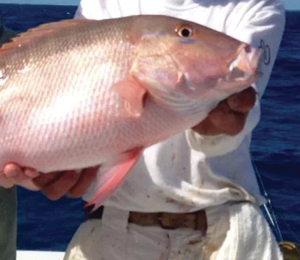 Although closely related to the snapper, the Margate is actually a member of the Grunt family. The full name of this fish is the White Margate because of its coloring; the fins are grey and the body color can range from grey to silvery. Margate can be caught not only on Key West fishing trips but also in the Bahamas and other parts of the Caribbean. Margate generally vary in size from 10-20 inches in length, although they have been known to reaach 30 inches long. The largest Margate on record in Florida weighed in at 19 and a half pounds.

What most distinguishes the White Margate is the high profile of its back, which makes it distinguishable from the Black Margate. The White Margate also has a small eye with a white iris. Margate feed on small bottom dwellers like worms and urchins. They are relatively easy to spot when they're feeding because they will drift with their nose down as they hunt for a good meal. Margate are not schooling fish, preferring to swim alone or in small groups.

How We Get Margate Snapper

When looking to catch White Margate, look in the flats of sand between patch reefs. They can also be found drifting over beds of sea grass. Regardless of the location, Margate prefer the same bait: small, live baits or cut strips of Bonita. However, a slightly lighter tackle is recommended when the Margate are in the shallows.