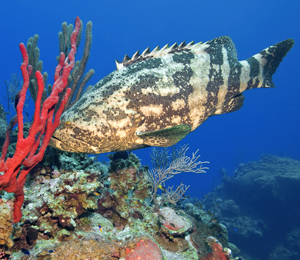 A Little about the Nassau Grouper

As one of the larger members of the perciform fish known as groupers, the Nassau grouper grows to a medium to large size at just over a meter in length. Although it may grow up to 55 lbs. It is more common for it to weigh between 10 and 20 lbs. Its color varies greatly depending on the individual fish’s environmental setting. In shallow water under 60 feet, the Nassau grouper is often tawny brown in color, but species living deeper underwater are mostly pinkish red or orange red. Over the base color, the grouper have lighter stripes, bar patterns, darker spots, and a prominent forked stripe on top of their head.

Nassau grouper live in the western region of the Atlantic Ocean, spreading throughout Bermuda, Florida, the Bahamas, and Brazil. It may also be found in a few special areas of the Gulf of Mexico, especially along the coastline of Key West and Belize. The Nassau grouper is one of the largest fish species that is found in the deep sea waters around coral reefs. It is also the most important of all grouper species for commercial fisheries in the West Indies, but has become endangered recently due to overfishing. The Nassau grouper is listed among the U.S. National Marine Fisheries Service Species of Concern.

Feeding Patterns and Unique Characteristics of the Nassau Grouper

The Nassau grouper possesses a thick body with a large mouth that is utilized to inhale its prey from coral reefs. When it opens its mouth and dilates its gills, the grouper can draw water in and engulf the prey whole in one swift movement. The Nassau grouper usually camouflages itself in the reef and rocks, until it pounces on its prey unexpectedly. It mainly feeds on parrotfish, wrasse, damselfish, squirrelfish, snapper, grunts, shrimp, crab, octopus, and small lobster. Interestingly, it is a friendly fish that will happily take food from scuba divers and repeatedly return looking for more handouts.

During the winter months of December and January, the Nassau grouper begin spawning in large aggregations from a couple dozen to more than 100,000 fish. Spawning always occur around the time of the full moon, and in the same location year after year. The Nassau grouper is actually hermaphrodite, which means that they have the ability to change their sex. After spawning for one or more years as a female, the grouper can begin functioning as a male for future seasons.

What You and Your Guide Are Looking For Nassau Grouper

In the Florida Keys, the Nassau grouper is often located on offshore rocky bottoms, coral reefs, and wreck sites. Most of them occur at depths extending to nearly 100 meters below the surface, since they prefer to swim along the bottom. Juvenile Nassau grouper can be found within some inshore areas, where they rest in the sea grass beds for a nursery habitat. While they may sometimes form schools, the groupers are typically a solitary species. Being one of the few grouper species that feeds during the day, the Nassau grouper is the perfect target for hardcore reef fishermen during mid-day action.