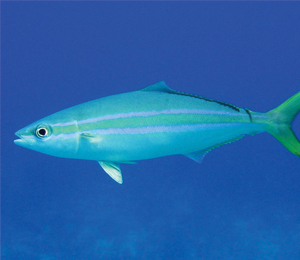 The Rainbow Runner is a fish that travels in large schools and is distinguished by its shape and vivid coloring. They move very quickly, which is partially in thanks to their bodies being in the shape of a torpedo. Some can grow upwards of six feet in length, but most reach maturation between two and three feet. Due to its coloring, it has also been known as rainbow yellowtail, Spanish Jack and Hawaiian salmon, among other names. The largest Rainbow Runner caught in Florida is 23 lbs.

Rainbow Runners are known to be picky eaters, sometimes being caught accidentally when they go for chum that was set out to catch other fish varieties. However, they have been known to eat a variety of fishes that are small in nature, such as crabs, shrimps and cephalopods such as inkfish. As they increase in size, the prey they choose to feed on can be larger or more difficult to acquire because their abilities to hunt also increase. They are also known for their coloring, which makes them so easily identifiable. In fact, they were given the name Rainbow Runners because their coloring resembles that of a rainbow: the top of the upper body is a dark, olive green that melds into a stripe of striking blue, which is followed by a thicker line of dark green, followed by another stripe of blue. The dark green after that then fades into the white of its lower body and belly. The number of stripes varies, but the general striping and colors are the same.

What To Look For fishing for Rainbow Runners:

Rainbow Runners have a head that is long and pointed with a relatively small mouth. They are often caught when fishing for Yellowtail snappers, among other fish species, because they enjoy the type of chum used. Unlike other types of fishes, they are also not afraid to approach fishing boats, which is another reason they are often caught when fishing for other species. However, due to the small size of their mouths, they are only able to be caught with the least heaviest leader and the smallest hooks possible. They have a high ranking as far as table fare goes, as they offer a delicious meat.