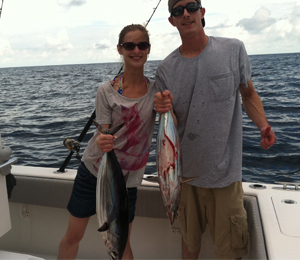 Regarded as one of the most sustainable of all tuna, the skipjack is fast-growing and fairly plentiful. Sometimes called the oceanic bonita or striped tuna, it's one of the small to medium-sized tunas, and is sometimes confused with the little tunny. Almost all of the commercial skipjack fishing happens in the Pacific, and the species makes up the bulk of the canned tuna market.

Key West fishing trips will encounter the skipjack while trolling for pelagic species on light tackle. While considered by some to be not quite as tasty the more famous sport tunas, skipjack, when bled properly, are good eating. It's a fast swimmer, found in sub-tropical and tropical waters around the world.

How They Feed, What Makes Them Unique

Primarily eating bait fish near the surface near dawn and dusk, the skipjack is also an important food source for larger pelagic species and sharks. Key West fishing groups can find skipjack schooling under drifting objects, or in smaller groups in the open water. After spending the day near the surface, this species tends to descend at night to depths up to 800 feet.

The skipjack, like other tuna, has a fusiform shape, meaning it looks kind of like a football. With two dorsal fins on top of a dark blue or even purple back and 4 to 6 dark lines running along a silvery body, it's an easy fish to identify. It's common for the fish to reach a fork length of over 30 inches with an average weight range of around 20 pounds.

What you and your guide are looking for when catching skipjack isn't much different than what you are scanning for when trying to land dolphin, sailfish, and other tuna. A good sign can be birds feeding on the bait skipjack favor. Often they can be seen jumping out of the water while chasing bait. An interesting trait of skipjack is that they often like shade. Frequently, they are found just ahead of a rainstorm, schooling in the shade. They are strong fighters and make for a great challenge.